Koike steps down as leader of Party of Hope 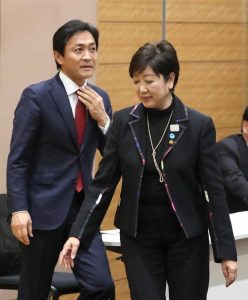 All papers reported that Tokyo Governor Koike on Tuesday announced her resignation as president of the Party of Hope so that she can concentrate on her duties as the Tokyo leader, quoting her as telling party parliamentarians last night: “Diet members should be responsible for national politics. I’d like to task co-leader Tamaki with heading the party.” She told the press afterward: “My responsibility as the party founder has come to an end.” The papers speculated that the governor had no choice but to distance herself from national politics since her grip on power has weakened rapidly following the party’s dismal performance in the Oct. 22 general election.

Tamaki, who was elected as co-leader last week by defeating rival candidate Lower House member Ogushi, decided yesterday to appoint former cabinet minister Furukawa as secretary general. The new party leader also tapped former Senior Vice Defense Minister Nagashima as policy affairs chairman and former Environment Minister Hosono as the chair of the party’s constitutional research commission. Given that both Nagashima and Hosono are known to be defense hawks, the papers said the new Party of Hope leadership will be inclined to take a realistic line on the diplomatic and constitutional fronts. They added that party lawmakers, who supported Ogushi in the presidential race last week, were displeased with these appointments, with some of them hinting that they may leave the party if the Tamaki leadership moves to advocate the amendment of Article 9 of the Constitution.