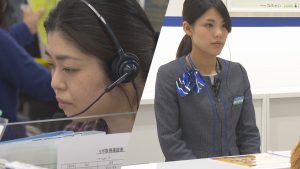 NHK’s “Close-up Gendai+” reported on growing moves to increase the number of regular employees at major companies, such as First Retailing, JAL, and Credit Saison. The program said this is due to a severe labor shortage in Japan, adding that one company has decided to make all of its part-time staff regular employees without changing their working hours. Many companies reportedly think it is essential to motivate their employees through such measures as converting non-regular employees to regular employees and introducing flex-time or telecommuting systems in order to secure sufficient human resources in view of the declining working-age population in the country. The program also reported on moves to employ former gang members, saying that they are popular among companies because they are thought to be “motivated” and have more “guts” than other people.