HANOI — The hospitality U.S. President Donald Trump received on his tour of Asia was so warm that he may have felt more at home than in Washington, where he is constantly sparring with the media. But while Trump was relishing the red-carpet treatment and promoting his “America first, bilateral first” trade policy, Chinese President Xi Jinping rather deftly positioned himself as a leader on free trade and global development.

Even Xi’s expansionary policy in the South China Sea was left mostly unchecked.

Last week, Time magazine’s cover headline declared, “China Won.” The story was about the competitiveness of the country’s economic system under authoritarian rule, versus the West’s combination of free markets and liberal democracy. Yet, after Trump’s visit, the same could be said about geopolitics.

The “America first” tour ironically underscored China’s newfound advantage over the U.S. in the international arena — an edge it is likely to maintain at least for the duration of Trump’s presidency.

Trump began his tour on Nov. 5 with a round of golf in a Tokyo suburb, accompanied by Japanese Prime Minister Shinzo Abe. His whirlwind itinerary took him to South Korea for meetings with President Moon Jae-in, and on to China for talks with Xi.

Trump seemed to genuinely enjoy himself — so much so that he lavished praise on strongmen like Xi and Duterte. He called the Chinese president a “nice man” and “great” leader, and said he “appreciated” how Beijing welcomed him. In Manila, he said he received a “red carpet like nobody … has probably ever received. And that really is a sign of respect, perhaps for me a little, but really for our country.”

In all likelihood, the carefully choreographed hospitality was not extended out of respect, but out of concern over the president’s notorious unpredictability.

Ahead of Trump’s stop in Vietnam, Communist Party officials on Nov. 6 summoned the top editors of every major news outlet in every major city, according to local reporters. The officials demanded the editors refrain from publishing or broadcasting any negative stories about Trump, the reporters said. No demands were made about coverage of Xi or even Vietnamese leaders — only Trump.

Asian governments tried their best to avoid any friction with “the most unpredictable actor in the international order,” as Vali Nasr, dean of Johns Hopkins University’s School of Advanced International Studies, described Trump in a speech earlier this year.

The president demonstrated that unpredictability by suddenly reversing his original plan to skip the East Asia Summit in Manila on Tuesday, the last day of his trip. Then, in another twist, he ended up not attending after all.

Trump’s desire to skim over touchy subjects and complex issues became clear when he failed to press Xi for new commitments on North Korea.

While chatting with Russian President Vladimir Putin in Danang, Trump did bring up Russia’s alleged meddling in last year’s U.S. presidential election, and the two leaders agreed on a joint statement regarding Syria. But they only briefly touched on North Korea, even though Russia is believed to be supplying the rogue state with weapons technology and helping it skirt United Nations sanctions.

At a meeting this past Sunday with Vietnamese President Tran Dai Quang, Trump offered to mediate the South China Sea disputes — effectively taking a neutral, distanced stance. “I am a very good mediator and arbitrator,” he told reporters after the meeting.

“Today, China is the No. 1 economic power and we have to be friends,” Duterte told a business gathering in Manila.

On Monday, after a series of meetings, Indonesian Foreign Minister Retno Marsudi observed: “In general, the South China Sea issue seems to have been toned down in this summit.”

Likewise, no meeting that Trump attended explicitly addressed the ethnic cleansing of Myanmar’s Rohingya minority and the rampant extrajudicial killings in Duterte’s drug war. One might even say Trump was in his element among leaders like Putin, Xi, Duterte and Thai Prime Minister Prayuth Chan-ocha — men who tend to be suspicious of politically correct international priorities like human rights, global warming and freedom of the press.

Xi barely had to break a sweat the whole time Trump was in the neighborhood. He was able to concentrate on convincing Asia-Pacific leaders that China is serious about domestic economic reforms, promoting a multilateral trade system and supporting sustainable development goals — including economic development that does not impede climate change initiatives and other environmental efforts.

The hypocrisy runs deep here. China, where thousands are executed without fair judicial proceedings every year, is one of the worst performers on human rights — another critical element of sustainability. But the difference between Trump’s and Xi’s public positions, particularly Trump’s repeated emphasis on bilateral trade schemes, seems to make many forget that reality. 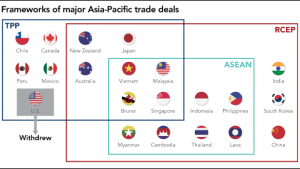 Trump frequently complained about government subsidies, state-owned enterprises, intellectual property abuses and trade imbalances — jabs mainly aimed at China, though he also chided Vietnam for its trade surplus with the U.S. and pressured it to buy American military hardware. As for why he prefers bilateral trade deals, he blasted multilateral frameworks as “large agreements that tie our hands, surrender our sovereignty, and make meaningful enforcement practically impossible.”

The emphasis on sovereignty and independence jibes with the indifference Trump showed on human rights, an issue abusers tend to insist is a domestic concern.

APEC and ASEAN states repeatedly stressed their support for alternative multilateral pacts, including the proposed Regional Comprehensive Economic Partnership, which unlike the TPP would include China and India. They are also eyeing a broader Free Trade Area of the Asia-Pacific, or FTAAP.

When it came to drawing up an APEC ministerial joint statement, the U.S. reportedly insisted on articulating the shortcomings of the World Trade Organization and the importance of bilateral arrangements, delaying the document’s release. The U.S. is also said to have opposed mentioning FTAAP in the APEC summit’s final Danang Declaration, though the proposed trade area made it into the declaration anyway.

Already, proponents of multilateralism are looking ahead to the day when Trump leaves the White House. A case in point: The trade ministers of the 11 remaining TPP signatories agreed in Danang to move ahead with the pact sans the U.S., and the renewed deal includes a clause setting procedures for the U.S. to rejoin later on.

“We have built the basis for a U.S. comeback,” Japanese cabinet member Toshimitsu Motegi, who co-chaired the ministerial negotiations, told reporters after the agreement was reached.

The U.S. business community itself has mixed feelings about Trump’s insistence on bilateralism. “The complexity of a spaghetti bowl of individual bilateral trade deals” can be a significant burden for companies doing business in multiple Asia-Pacific economies, Steven Okun, chair of the American Chamber of Commerce Singapore’s TPP task force, told The Nikkei. “Regional trade deals such as the TPP are the most effective way to facilitate exports to multiple markets by establishing uniform rules of the game, and therefore to increase jobs back home.”

To be sure, any one-on-one trade talks between the U.S. and major partners — especially China — are likely to steal the spotlight from final moves to put the TPP into effect. And if those talks proceed in serious and constructive ways, they could help revitalize U.S. exchanges with East and Southeast Asian countries.

But if the Trump administration focuses on wielding sticks, like the “Super 301” provision of U.S. trade law and other retaliatory measures, those ties could fray further. The decline of U.S. influence in Asia would likely accelerate, expanding a power vacuum China is eager to fill.