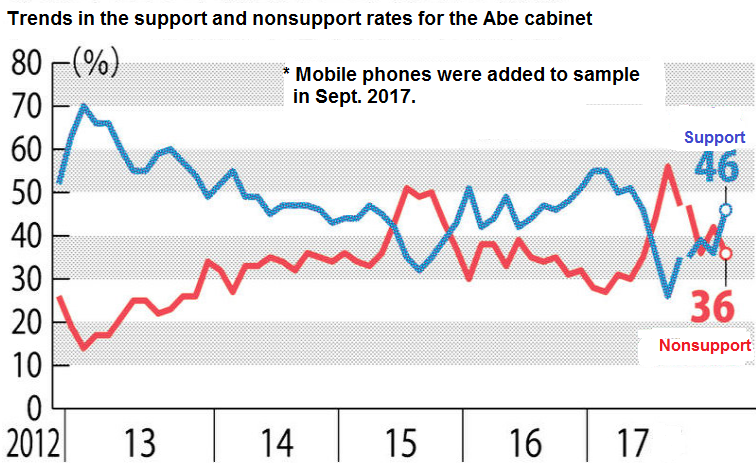 The Mainichi Shimbun conducted a nationwide [spot] survey on Nov. 11-12. With the Liberal Democratic Party and other forces in favor of amending the Constitution winning the general election and managing to retain more than two-thirds of the seats in the Lower House, 36% of pollees said that the Diet “should not rush” to propose the constitutional amendment bill, surpassing the 24% who responded otherwise. The approval rate for the Abe cabinet rose ten points to 46% from the previous survey conducted before the general election (Sept. 26-27), whereas the disapproval rate fell six points to 36%.

Opinion divided over the proposal for an amendment to clearly define the existence of the Self-Defense Forces while retaining Article 9’s paragraph 1 and 2. While 33% approved such a proposal, 29% disapproved and 34% answered “don’t know.” Though a simple comparison is not possible due to different questions asked, the Sept. 2-3 survey showed that 34% responded “disapprove,” while 27% said “approve.”

In May, Prime Minister Shinzo Abe announced that he will seek to enforce revisions to the Constitution in 2020, but he has recently said that “there is no set time table.” Even among LDP supporters, 51% answered “should not rush” to propose the constitutional amendment bill.

Abe will end his second term as president of the LDP next September. Asked whether he should continue to serve his third term, 35% answered “yes,” whereas 53% said “no.” In the latest survey, approval for the cabinet exceeded disapproval, but this does not mean Abe has regained his popularity. Asked about the reason for approval of Abe, a leading 46% said “because there are no other good people or political parties.” As for the reason for disapproval, the response “because I don’t think highly of Abe” came in top at 49%.