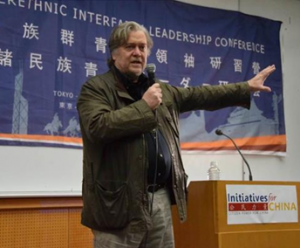 Asahi reported on yesterday’s speech in Tokyo by former White House Chief Strategist Steve Bannon in which he criticized past U.S. administrations for failing to rein in China by saying: “China’s remarkable development has posed a threat to the world. But the American political elites have neglected it…. They are foolish.” Bannon justified President Trump’s “America First” motto, explaining that the administration has decided not to accept a large number of immigrants in order to give jobs to “forgotten people.” In remarks to Japanese analysts on human rights issues in China, he also stated: “President Trump is the most talented negotiator in the world. I was honored to be able to work for him.” Sankei filed a similar story, adding that Bannon praised the President’s recent East Asia tour by calling it “wonderful.”