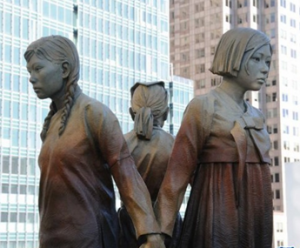 Sankei gave top play to Tuesday’s unanimous adoption by the San Francisco city assembly of a motion to accept the donation of a set of comfort women statues from a group of Chinese-Americans. The daily projected that the Osaka city government is likely to end its sister city ties with San Francisco if the memorial officially becomes the property of the city. Chief Cabinet Secretary Suga reportedly reacted strongly by telling the press yesterday: “The move runs counter to our position. It is extremely regrettable.”