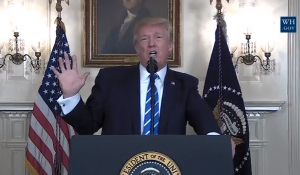 NHK reported online that President Trump delivered a speech at the White House on Wednesday, during which he stressed the significance of his first visit to Asia. According to the network, the President said he was able to confirm unity with nations to maximize pressure on North Korea, quoting him as saying: “We asked all nations to support our campaign of maximizing pressure for North Korean denuclearization. They are responding by cutting trade with North Korea and expelling North Korean diplomats and workers.” The network said the President also said he agreed with Prime Minister Abe in Japan to maintain cooperation to realize the goal of North Korean denuclearization. The President also reportedly said: “Japan also committed to shoulder more of the burden of our common defense. This will include purchases of U.S. advanced capabilities from jet fighters to missile defense.” The network also pointed out that although the White House indicated that the President would decide whether to put North Korea back on the list of state sponsors of terrorism during his visit to Asia, the President did not refer to the topic in his speech on Wednesday.