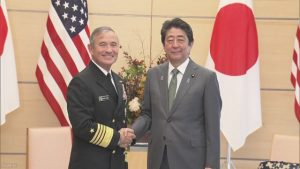 NHK reported this afternoon that Prime Minister Abe met with visiting PACOM Commander Harris at the Kantei today. The network said the two officials confirmed closer cooperation toward enhancing the response capability and deterrence of the U.S.-Japan alliance given the increasingly severe security situation in the region. According to the network, PM Abe said: “President Trump’s recent visit to Japan has further strengthened the ties of the U.S.-Japan alliance.” Adm. Harris reportedly referred to the recent joint military training held between the MSDF and three U.S. carriers in the Sea of Japan by saying: “The military drills represent the excellent relationship between the U.S. and Japan. President Trump has stressed the importance of the U.S.-Japan alliance, and I would like to play my own role.”