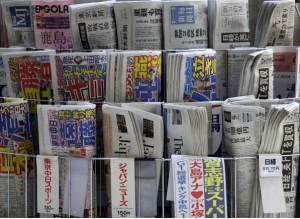 According to data of the Japan Newspaper Publishers & Editors Association, the total circulation of general newspapers including national and local papers decreased from 46.96 million in 2007 to 39.82 million in 2016, a 7.14 million drop over ten years. Since 2013, after the inauguration of the second Abe administration, total circulation has dropped by one million on average every year.

Among publishers, the decline of the Asahi Shimbun is especially notable. In fiscal 2014, the year the publisher was criticized for its false reports on comfort women, its circulation dropped by 640,000 copies, and the downward trend has continued ever since. In April 2013, the Asahi’s morning edition had a circulation of 7.6 million, but as of April 2017, the number had shrunk to 6.24 million. During four years under the Abe administration, the Asahi’s circulation dropped by 1.36 million, according to data of the Japan Audit Bureau of Circulations.

The anti-Abe Asahi is not the only paper hemorrhaging readers. The pro-Abe Yomiuri Shimbun’s circulation dropped from 9.86 million to 8.81 million, a dramatic loss 1.05 million readers, during the same four years. A similar trend is seen at other leading publishers–Mainichi, Nikkei and Sankei– regardless of their stance toward the administration, either pro-Abe or anti-Abe. These big five publishers are consequently loosing advertisement revenue, which is their lifeblood.

The Asahi’s consolidated accounts ending in March in fiscal 2017 marked 400.9 billion yen in sales, down 68.6 billion yen compared with four years ago. Operating profit was down 41% compared with the year before.