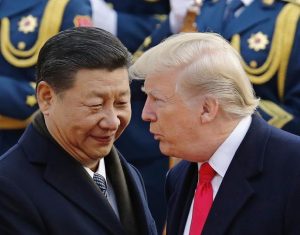 Asahi wrote that President Trump commented on Chinese President Xi’s decision to send a special envoy to North Korea on Friday by saying on Twitter: “China is sending an Envoy and Delegation to North Korea – A big move, we’ll see what happens!” The paper noted that the President stated in his remarks at the White House on Wednesday: “President Xi pledged to faithfully implement United Nations Security Council resolutions on North Korea and to use his great economic influence over the regime to achieve our common goal of a denuclearized Korean Peninsula.” Yomiuri speculated that the President will probably decide whether to put North Korea back on the list of state sponsors of terrorism after gauging the outcome of the Chinese mission’s visit to Pyongyang. Nikkei wrote that the President is now watching closely to see whether China will fulfill its promise to apply more pressure on North Korea.