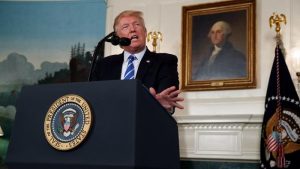 All Thursday evening papers reported on President Trump’s remarks at the White House on Wednesday, during which he stated: “America’s renewed confidence and standing in the world has never been stronger than it is right now…. In Asia, our message was clear and well received: America is here to compete, to do business, and to defend our values and our security…. On each trip, I have worked to advance American interests and leadership in the world…. America is back. And the future has never looked brighter.”

Concerning Japan, the President stated: “Prime Minister Abe and I agreed on our absolute determination to remain united to achieve the goal of denuclearized North Korea…. Japan committed to shouldering more of the burden of our common defense by reimbursing costs borne by American taxpayers, as well as by making deep investments in Japan’s own military. This will include purchases of U.S. advanced capabilities – from jet fighters to missile defense systems worth many, many billions of dollars – and jobs for the American worker.”

Asahi and Yomiuri wrote that although a senior USG official had indicated that the President would decide whether to put North Korea back on the list of state sponsors of terrorism at the end of his Asia trip, he did not refer to the issue in his address on Wednesday.