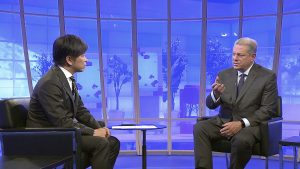 NHK’s “Close-up Gendai +” reported on its interview with former Vice President Al Gore, who received a Nobel Peace Prize for his efforts to fight climate change. The program said that 10 years after the release of the film “An Inconvenient Truth,” a sequel called “An Inconvenient Sequel: Truth To Power” will be released in Japan on Friday. The new film depicts Gore’s fight against global warming, including efforts to help conclude the historic Paris Agreement and President Trump’s announcement of the U.S. withdrawal. Gore said during the interview that the accord is attainable since renewable energy costs are dropping and more efficient technologies are being developed. On President Trump’s announcement of the U.S. withdrawal, he said that he was happy to see all other nations pledging to uphold the Paris accord and U.S. states such as California and New York as well as major U.S. companies said they will adhere to the Paris Agreement regardless of the President’s decision. He said that the U.S. is still within the framework of the accord, adding that the U.S. will reduce greenhouse gas emissions beyond the level pledged in the accord. He also said that support for measures to combat global warming is increasing in the U.S. With regard to Japan, he said it should stop subsidizing power generation using fossil fuels such as coal.