“Premium Friday” proves no inducement to leave the office early 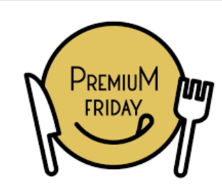 Japanese people have long been notorious for working punishingly long hours, sacrificing their health and their family time for the sake of corporate gains to the extent that some of them even die from overwork. Rectifying this tendency has been an elusive goal of the Japanese government for decades, with successive administrations implementing fruitless initiatives to encourage workers to take more time off. The Abe cabinet launched the “Premium Friday” campaign with great fanfare in February, calling for companies to allow workers to knock off at 3 p.m. on the last Friday of each month so that they can enjoy shopping and dining out.

But the public has not been very responsive to the latest high-profile campaign, which is also aimed at expanding domestic demand through greater consumer spending by extending the weekend. Trade Minister Seko has already hinted that the nine month-old program may have to be reexamined, citing a “lack of enthusiasm” among both employees and employers. A separate Abe administration proposal to establish a “Kids Week” has not been met with much support either. The idea calls for cutting short the public school summer holiday by five days and scheduling a separate holiday. This other holiday would be taken at different times of year to reduce crowding at sightseeing destinations and encourage family trips. These developments prompted Mainichi (8/31) to look into why Japanese people are such workaholics and what needs to be done to improve their work-life balance. 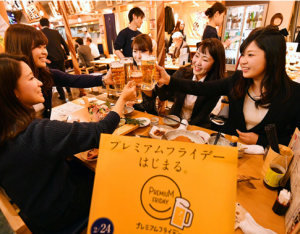 “Since early childhood, Japanese people are educated and trained to function in  a work culture where putting in long hours is praised as a virtue,” says Tetsuya Ando, who founded an NPO called Fathering Japan with the goal of encouraging men to get more involved in child rearing and household chores. Pointing out that students with “perfect attendance” customarily receive awards upon graduation, the activist argues that some Japanese may be “programmed” to go to the office even if they are sick. “Young employees can’t take time off because their bosses don’t,” adds Ando, who explains that some employees, men in particular, are reluctant to take extended vacations because they have few hobbies or friends and wouldn’t know what to do with their time off.

Noriyuki Ueda, a cultural anthropologist at Tokyo Institute of Technology, explains that Japanese people tend to attach more importance to being present in the workplace than to what they accomplish there. Noting that employees who work late or on weekends tend to get more promotions, the scholar conjectures that Japanese workers may be reluctant to take vacations out of fear that they will be replaced or ostracized by their more dedicated colleagues. The professor claims that as peer pressure is very intense in Japan’s communitarian culture, some people are resentful of employees with an easygoing attitude. They even view people who take long vacations as disloyal to the company.

Japan Research Institute (JRI) director Hisashi Yamada blames the nation’s long-term-employment system for the hard-driving office culture. He states that since many Japanese companies and labor unions believe that ensuring lifetime employment is crucial, management is tempted to keep the fulltime workforce to a minimum and have them work long hours. Compared with Western companies that make labor adjustments through layoffs, local employers expect employees to work longer hours when business is booming and shorter hours during slowdowns. The labor analyst also explains that taking breaks is becoming more difficult now than it was in the 1990s and the 20oos in view of the prevailing “customer-first” orientation within corporate Japan. As they struggle to stay afloat in a more service-oriented market, Japanese firms are inclined to place unreasonable demands on their employees in the form of overtime. For instance, the excessive emphasis on pleasing customers forced Yamato, Japan’s biggest package delivery company, to have their drivers work until midnight without pay to handle the surge in demand caused by a boom in online shopping that offers free delivery. 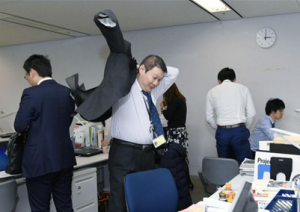 All three experts suggest that some form of governmental “persuasion” will probably be necessary to offset Japan’s culture of excessive work. JRI’s Ueda underscores the need for the Abe administration to overhaul the present employment structure with its emphasis on male full-time workers or it will be extremely difficult for companies to maintain sufficient workforces in view of the chronic labor shortage resulting from Japan’s declining population. Fathering Japan President Ando urges the Education Ministry to instruct school administrators to immediately put an end to the prevalent practice of honoring students who achieve perfect attendance. He also says that because corporate managers are responsible for creating more accommodating workplaces, those who dissuade their subordinates from taking long vacations should be demoted so that younger workers are able to request time off without hesitation. Tokyo Tech’s Ueda proposes the establishment of mandatory 10-day vacations for workers, arguing that companies should be penalized for noncompliance. The academic also urges Japanese employees to rethink the concept of vacation time, saying: “Many of them take time off to recharge before going back to work, but taking a break should be enjoyable in and of itself. Getting away from the workplace for extended periods allows workers to expand their horizons. This is essential to leading a more fulfilling life.”