“Instabae,” a newly coined Japanese term to describe things that look good on Instagram, was picked as one of the 30 candidates for the top buzzword of the year in Japan. Launched in 2010, Instagram now has over 800 million monthly active users worldwide and over 20 million in Japan (as of September). According to the Ministry of Internal Affairs and Communications, roughly half of Japanese in their 20s and one-third of those in their teens use the photo-sharing application. Nikkei (10/3) wrote that Instagram is becoming an indispensable tool for young people in deciding where to eat or what to buy, prompting companies to exploit the “Instabae” phenomenon to develop their market strategies. 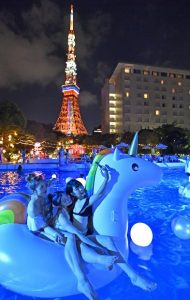 A senior market strategist at the Japanese electronic commerce company Rakuten told Sankei (9/20) that Instagram and other social networking services are helping boost consumer spending especially on travel, food, and clothes. A survey conducted by the Consumer Affairs Agency in March showed that one in four people in Japan have posted photos or videos on social networking sites. When asked what kind of things they’ve done for the purpose of taking good photos for social media, 45.6% said they’ve visited picturesque sites, 38.7% said they’ve gone out to eat, and 26.9% said they’ve gotten together with friends. The strategist commented that although young Japanese are said to be disinclined to spend money, the economic impact of the spending behavior of those who flock to attractive vacation spots and restaurants to take photos for social media cannot be ignored.

A special “Night Pool” event organized by a Tokyo hotel this summer was a major hit with Instagrammers. Many young women gathered there to take snazzy photos of themselves in the swimming pool with great views of Tokyo Tower in the background. Instead of swimming, the customers floated around with their smartphones at the ready. Krispy Kreme’s special Halloween doughnuts and Tully’s Coffee’s pumpkin spice latte topped with a Halloween cookie also went over well with Instagrammers.

Tourism is another field that is eager to take advantage of the power of Instagram. Major travel agency H.I.S. has posted over 370,000 photos on its Instagram account since its launch in the spring of 2016, and the company now offers tours to places that are popular on Instagram. The platform is especially useful for small businesses and local governments that are struggling to market their products and attract visitors due to their limited resources. Eye-catching photos of their undiscovered charms are helping them attract a wider range of customers. The number of tourists visiting Inuyama in Aichi Prefecture from January to July this year increased to 330,000, up 15,000 from last year. But instead of Inuyama Castle, one of the oldest castles in Japan, the biggest reason for the recent surge in tourists appears to be the colorful rice dumpling sweets offered by a local confectionery that have attracted numerous young visitors, particularly women. 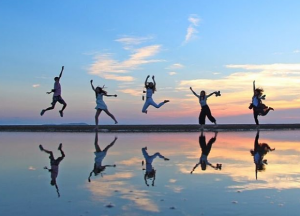 Mitoyo in Kagawa Prefecture is among the many rural cities in Japan that are losing economic vitality as they hemorrhage young people. However, a series of beautiful photos posted on the city’s Instagram account may have helped to change that. The photos depicted an astonishing scene of a beach in the city that looks like a mirror. An increasing number of tourists from inside and outside the prefecture are now visiting the beach to take photos of this captivating scene. Some people are calling it the Japanese version of the world’s largest salt flat in Bolivia, Salar de Uyuni. 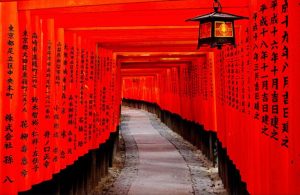 Instagram is also a popular tool for foreign tourists in deciding where to visit in Japan. Fushimi Inari Shrine in Kyoto, which is famous for its more than 10,000 vermillion torii gates, has become one of the most popular tourist sites for foreigners in Japan thanks to people posting striking images of it on Instagram. The popularity of the shrine may have even contributed to an increase in land prices in the area. A nationwide survey of land price trends in Japan that was published by the Land Ministry in September showed that the largest increase in the price of commercial land was a 29.6% surge recorded at a location near Fushimi Inari. As market strategists point out, Instagram may offer hints on how to conduct successful PR campaigns.