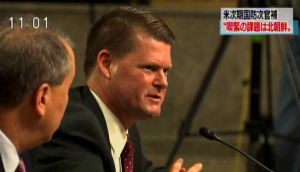 NHK reported this morning that Randall Schriver, who was nominated as the next assistant secretary of defense for Asia and Pacific affairs, said at a congressional hearing on Thursday that he will work on the pressing issue of North Korea’s nuclear and missile development and expressed the view that a solution should be achieved through diplomatic means.

The network said Schriver is a close aide of pro-Japan former Deputy Secretary of State Armitage and is also known as a China expert. He was quoted as saying: “We need to get out of that binary trap of we either go to war and have a military conflict or treat North Korea as a nuclear state.” On a possible dialogue with North Korea, he reportedly said that it must be a concrete dialogue toward denuclearization. Meanwhile, the network said Schriver expressed strong concern about the rise of China, adding that he pointed out the need to promote measures to ensure American superiority under a long-term strategy and stressed the focus shouild be on a response to China.