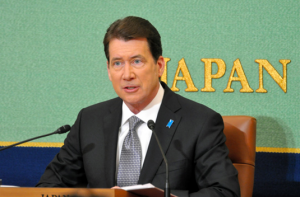 Saturday morning’s Asahi, Mainichi, Sankei, Nikkei, and Yomiuri gave moderate inside-page coverage to Ambassador Hagerty’s press conference at the JNPC on Friday, during which he commented on President Trump’s recent visit to Japan. Sankei and Mainichi wrote that the Ambassador gave high marks to the President’s Japan trip by saying that it was a “great success” and that the bilateral relations have never been closer.

All the papers highlighted the Ambassador’s disclosure that the President and Prime Minister Abe discussed a bilateral FTA when they held a summit on Nov. 6. The Ambassador was quoted as saying: “We discussed a full range of tools that can be used to address the trade deficit, including a free trade agreement.” He added that a bilateral FTA is “very possible.” The dailies said these remarks are inconsistent with the Japanese government’s explanation that an FTA was not taken up in the summit. Speaking on the TPP, the Ambassador stated: “Let me be clear. The United States will not come into this agreement under the terms as they are laid out now.”

Asked about the President’s call for Japan to purchase more American defense hardware to reduce the U.S. trade deficit, the Ambassador said: “There may be a bit of confusion around the President’s goal. The President has stated very clearly that our overarching goal is to increase Japan’s [defense] capability…. Some byproduct of that may impact the trade deficit in a positive way, that’s true, but that is not the goal.”

The Ambassador spoke on the two leaders’ agreement on applying maximum pressure on North Korea, underscoring that major progress was made toward the goal of denuclearizing the Korean Peninsula. According to Sankei, he referred to Japan’s announcement on its unilateral sanctions against 35 entities and individuals in North Korea, and said it is important to curb Pyongyang’s provocations by stepping up pressure on the Kim Jong Un regime. Regarding the fact that the DPRK has not staged any military provocations since Sept. 15, the Ambassador said he would like to refrain from reading anything into this.

All networks reported online on the Ambassador’s speech, with TV Asahi highlighting his remark that the U.S. will not participate in the TPP under the current framework. TBS said the Ambassador expressed hope for the commencement of talks on a U.S.-Japan FTA. All networks also reported that the Ambassador gave high marks to President Trump’s recent visit to Japan.