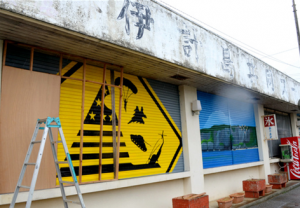 Saturday morning’s Asahi reported that the municipal government of Uruma in Okinawa decided Friday not to publicly display graffiti warning of the possibility of a U.S. military plane crash painted by a Kyoto-based artist on the wall of a local store as part of a city-sponsored art festival. The city has covered the graffiti during the festival. The decision was made in response to the opinion voiced by some local residents that the artwork is inappropriate given that the event is designed to revitalize the local community.