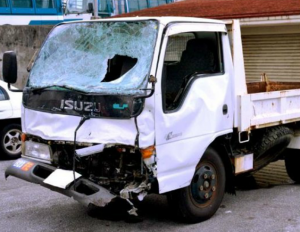 All Monday papers reported in their city news sections that a 61-year-old Okinawa man died when his car was struck by a U.S. military truck at an intersection in Naha on Sunday morning. The papers noted that the driver of the truck, a 21-year-old Marine stationed at Camp Kinser, was intoxicated at the time of the accident and the alcohol level detected on his breath was three times the permissible limit. The serviceman, who was arrested later for negligent driving resulting in death and driving under the influence of alcohol, has reportedly admitted to the charges. The suspect was not on duty while driving the military vehicle. According to several eyewitness accounts, the Marine ran a red light and entered the intersection. Okinawa Area Coordinator Nicholson issued a statement expressing “deep regret and heartfelt condolences” to the family and friends of the victim. According to Asahi, in response to a call from Vice Foreign Minister Sugiyama for the U.S. military to tighten discipline, Ambassador Hagerty pledged to cooperate with the investigation and vowed to prevent a recurrence.