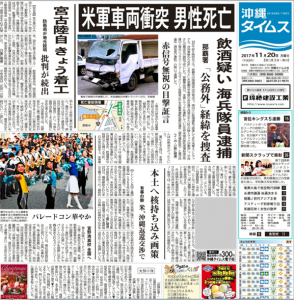 Ryukyu Shimpo and Okinawa Times both gave prominent front- and inside-page play to Sunday’s fatal traffic accident in Naha City caused by a U.S. Marine who was driving a military truck under the influence of alcohol. . Ryukyu Shimpo said that because the suspect is already under Japanese custody as the incident occurred while he was off duty, the issue of the transfer of custody will not arise. While the military vehicle was later removed by the U.S. side as a “military asset,” the police have explained that the investigation will not be hampered since the necessary inspection of the truck had been carried out before the vehicle was taken away by the U.S. military.

Both papers separately reported in their city news sections on the growing anger of the victim’s kin and local residents about the latest offense by a member of the U.S. military community. Okinawa Times said DUI incidents involving U.S. personnel have occurred repeatedly in the island prefecture despite the local military authorities’ pledges to prevent them. Ryukyu Shimpo expressed concern that appropriate compensation may not be paid to the victim’s family by the suspect and/or the U.S. military. It separately ran an editorial describing the U.S. military as a “bad outlaw,” a phrase just the opposite of the U.S. military’s policy of becoming a “good neighbor,” noting that the accident took place only three days after Okinawa Area Coordinator Nicholson promised his utmost efforts to reduce incidents of misconduct by men and women under his command to “zero.” The editorial also took issue with the U.S. military authorities’ management of military-owned vehicles since the arrested Marine drove a military truck even though he was not on duty.