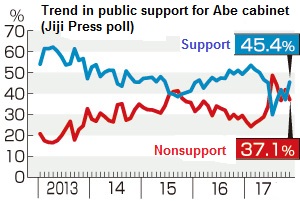 Public support for the cabinet of Japanese Prime Minister Shinzo Abe rose 8.3 percentage points from October to 45.4% this month, outpacing its disapproval rate, which dropped 4.7 points to 37.1%, for the first time in two months, according to a Jiji Press opinion poll conducted on Nov. 10–13. The results appear to reflect the public’s positive response to the ruling Liberal Democratic Party’s victory in the Oct. 22 general election and U.S. President Donald Trump’s first presidential visit to Japan earlier this month.

[The survey was conducted on Nov. 10–13 through individual interviews. For the survey, a total of 2,000 people were sampled from among men and women, aged 18 and over, across the nation. The valid response rate was 63.0%.]