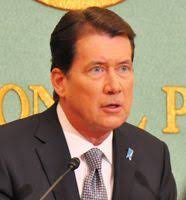 Tokyo — U.S. Ambassador to Japan William Hagerty gave a press conference on November 17 at the Japan National Press Club in Chiyoda Ward. Referring to the construction of a new U.S. military base in the Henoko district of Nago City with the relocation of Futenma Air Station, he said, “that option is the only one that is being pursued today. [As I was there] I noted that significant progress was being made and, as I am very well aware after visiting Futenma that the replacement of that facility is necessary.” With these words, he welcomed the progress made in the construction [of the new facility] and followed the stance taken by the Japanese and U.S. governments to date of promoting the plan.

The Ambassador spoke on the construction of the new base in Henoko in response to a journalist’s question. Mr. Hagerty toured Henoko and Futenma during his visit to Okinawa Prefecture on Nov. 13. He stressed the appropriateness of constructing a new base in Henoko, citing the fact that there is a high concentration of homes around the Futenma Air Station.

He pointed out the need to reduce the burden of the U.S. military bases while maintaining deterrence at the same time: “I want to not only minimize the impact of our facilities by working closely with the citizens of Okinawa, but also to deal with the pressure being exerted by the North Korean regime.”