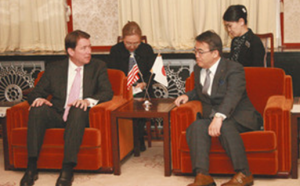 Chunichi Shimbun and other news outlets in the Chubu region reported on Ambassador Hagerty’s courtesy call on Aichi Governor Omura on Monday, during which they confirmed mutual efforts to further enhance bilateral economic ties with the considerable investment in the U.S. made by over 200 local firms, including Denso, which has assembly lines in Tennessee, in mind. The Japanese official asked for the Ambassador’s support for the Mitsubishi Regional Jet (MRJ) test flights currently being conducted in America for planes being manufactured at a Mitsubishi factory in the prefecture. The Ambassador was quoted as saying in reply that Aichi Prefecture holds the key to strengthening U.S.-Japan economic relations.