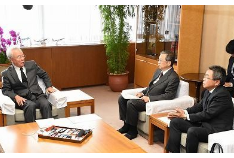 With regard to the traffic accident resulting in death caused by a U.S. Marine who was driving under the influence of alcohol on Nov. 19, the following day Okinawa Vice Governor Moritake Tomikawa summoned the Ambassador in charge of Okinawa Affairs Tsukasa Kawada, the Ministry of Foreign Affairs, and Okinawa Defense Bureau Director-General Koichiro Nakajima, the Ministry of Defense, to the prefectural government office to protest the incident.

Following is the gist of the meeting among the vice governor, the ambassador and the director-general:

Vice Governor Tomikawa: I have never heard of a U.S. military member driving a government vehicle during off-duty hours. Do you have any updated information on the incident?

Director-General Nakajima: No. I understand that the police are still investigating.

Vice governor: Does the fact that the suspect was driving a government vehicle mean that after drinking on base he took the vehicle from the base? If that’s the case, the incident suggests a problem with management on the U.S. side.

Director-general: According to the press, the suspect stated that he was drinking on base.

Vice governor: My greatest concern is compensation for the bereaved family. I understand that in general when such incident occurs during off-duty hours, compensation tends to be delayed. I request the government take swift action.

Director-general: Regarding compensation, I want to meet with the victim’s family first and take appropriate steps.

Vice governor: As soon as the investigation is completed, I want the government to handle the matter in timely manner.

Ambassador Kawada: After the incident, I met with U.S. Forces Okinawa Area Coordinator Lawrence Nicholson and requested him to prevent a recurrence and to enforce strict discipline.

Vice governor: I want the government to continue dealing with U.S. forces in a strict manner. (Abridged)