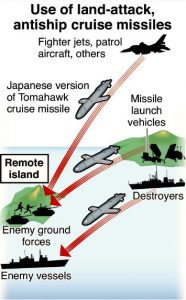 The government is considering developing a cruise missile capable of striking targets on the ground.

The Defense Ministry plans to start research on antiship missiles from fiscal 2018, and it is considering adding land-attack capabilities to the missiles. If realized, it will be the first time for Japan to develop land-attack cruise missiles on a full scale.

The key aim of the plan is to regain control of remote islands occupied by enemies, but the new cruise missile will be technically able to attack enemy bases, which is expected to heighten deterrence of North Korea.

Cruise missiles are precision guided weapons that head for targets using on-board radar and other equipment. Compared to ballistic missiles that fly on a parabolic curve and come from above, cruise missiles fly level using wings and jet engines, just like aircraft. Since the envisaged cruise missiles have much in common with the U.S. Tomahawk cruise missile, officials of the Defense Ministry position the planned cruise missiles as a “Japanese version of the Tomahawk.”

The Defense Ministry asked for ¥7.7 billion in its budget request for fiscal 2018 for research on a new antiship guided missile to defend remote islands. The ministry announced that it would start research on new antiship missiles, and it is considering incorporating land-attack missile functions that have many technical commonalities. The ministry aims to build a test model by fiscal 2022.

In the planning stage, the envisaged antiship cruise missile will have a range of over 300 kilometers, and be capable of being launched from special vehicles, destroyers, P1 patrol aircraft, fighter jets and other places. The missile will fly low using GPS and other devices, switch to on-board radar just before reaching a target, and destroy it.

With a shape that enhances its stealth capability, the new missile will be better able than U.S. Tomahawk cruise missiles of escaping enemies’ radar nets. In addition, the ministry also will consider introducing functions to enable the new missile to avoid interceptions more easily, such as changing directions during flight.

The government is considering developing land-attack, antiship cruise missiles due to a sense of urgency over the Chinese military, which is pushing to modernize itself in tandem with its maritime advancement. If the missiles are deployed, Japan’s ability to attack vessels approaching remote islands or ground forces landing on such islands will significantly increase. If vessels or aircraft equipped with the missile are deployed near enemy bases, they can be used to attack bases.