On Nov. 17, the Cabinet Office published the results of its “Public Opinion Poll on Public Safety.” Pollees were given a list of possible sites of crime and asked to select those places they are concerned they or someone close to them may become a victim of a crime (multiple responses permitted). Some 61.1% of respondents chose “the Internet,” making it the most frequently given response. This is the first time in the history of this poll for the Internet to be the most frequent response. This suggests that people are afraid of being caught up in a crime with the spread of the Internet society where it is easy to meet large numbers of people.

The victims of the recent incident in Zama, Kanagawa Prefecture, were people who posted on a members-only social networking site for those seeking suicide.

The Cabinet Office survey was conducted in September. Starting from this year’s survey, the age of the target pool was lowered to “18 and over.” In the previous poll conducted in 2012, the Internet was the third most frequently given response after “entertainment districts” and “the street,” although no direct comparison can be made.

The most frequently given responses after “the Internet” in this year’s survey were “entertainment districts” (54.3%) and “the street” (47.6%). After these three was “trains, planes, and other transport” (34.6%), which ranked seventh in the 2012 poll. More people are worried about crime today.

By age group, some 75.4% of those age 18 to 29 cited the Internet as a place they are concerned about encountering crime. Over 70% in their 30s through 50s also gave this response.

Asked the types of crime they are concerned they may encounter (multiple responses permitted), 60.7% said “Internet-based crime,” making it the most frequent response. Following this were “fraud” (50.2%), “burglary and similar crimes” (50.1%), and “assault and bodily injury” (46.1%).

Asked which crimes they would most like to see the police clamp down on, pollees were split between “Internet-based crime” (51.2%) and “vicious crimes, including murder and robbery” (51.1%). 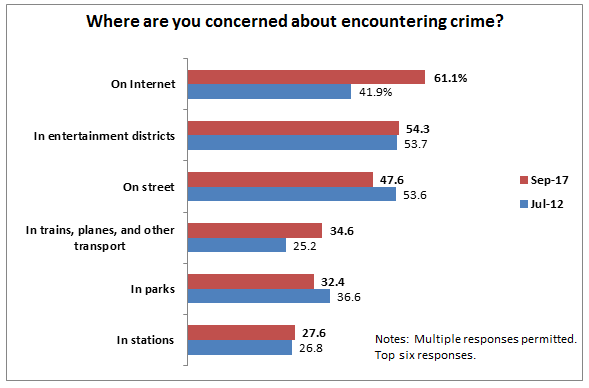