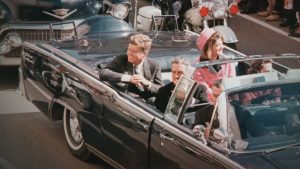 NHK’s “Close-up Gendai +” on Wednesday evening reported on the assassination of President John F. Kennedy 54 years ago and various conspiracy theories following the disclosure last month of about 30,000 declassified documents on the assassination. The program said while Lee Harvey Oswald is widely considered to have acted alone in carrying out the assassination, it interviewed an American journalist who believes that the CIA was involved and a former CIA chief who told the network that information from several intelligence agency chiefs in Eastern Europe show that Soviet Premier Khrushchev ordered the assassination. The network said that an American researcher has found several documents in the JFK files indicating that the FBI tried to give the public the impression that Oswald acted alone.

The program also reported on the disagreement in the U.S. between those who advocate the people’s right to know and those who insist on the need to keep documents classified.