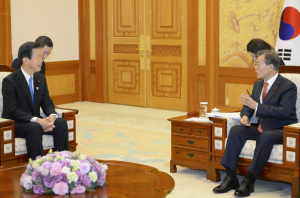 Friday morning’s Mainichi, Nikkei, and Sankei reported on Komeito Chief Representative Yamaguchi’s meeting with South Korean President Moon on Thursday in Seoul, during which the ROK leader expressed his willingness to visit Japan at an early date. Yamaguchi delivered a letter to Moon from Prime Minister Abe. Yamaguchi and Moon agreed to pursue forward-looking relations between their nations and resolve the North Korean issue peacefully by urging the DPRK to come to the negotiation table by applying maximum pressure on the nation. Nikkei and Sankei wrote that the issue of comfort women was not taken up in the meeting between the two officials.