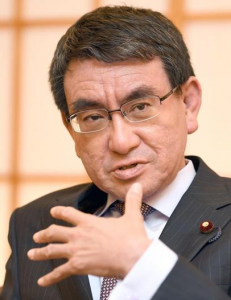 Friday morning’s Sankei front-paged its recent one-on-one interview with Foreign Minister Kono, during which he commented on the evacuation of Japanese nationals from South Korea in the event of a contingency on the Korean Peninsula by saying that Tokyo is making preparations in line with the U.S.-Japan Defense Cooperation Guidelines and that Japan is cooperating with South Korea on the matter. The foreign minister indicated the possibility of Japan making preparations to take in evacuees other than Japanese, including Americans, by saying that Japan will study the options for accepting evacuees because the nation will inevitably become a shelter for them. However, Kono added that although there is a possibility of a contingency on the peninsula in theory, there is no doubt that North Korea would be completely defeated by the overwhelming power of the United States. He stressed the need to continue to apply pressure on the DPRK until it comes to the negotiating table. Kono added that there is no possibility of the U.S. shifting to dialogue with North Korea without consulting with Japan.