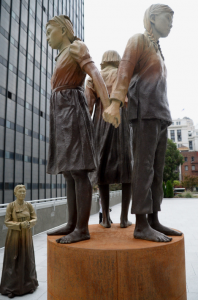 All Friday morning papers wrote that in response to San Francisco Mayor Lee’s signing on Wednesday a document formalizing the city’s acceptance of a donation of comfort woman statues from a Chinese-American civic group, Osaka Mayor Yoshimura expressed his intention to end Osaka’s 60-year sister city relationship with San Francisco by issuing a statement on Thursday saying: “The relationship of trust between the two cities has ended due to the action taken by Mayor Lee. I will begin administrative procedures to end the sister city relationship and complete these by the end of December.” Sankei wrote that the LDP will hold an ad hoc meeting on the matter next week.