Japan aims to participate in manned mission to Moon 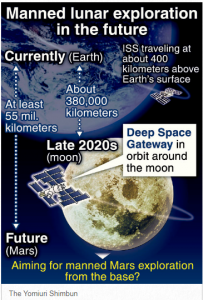 Sunday’s Yomiuri gave top play to a report saying that the GOJ has decided to aim to conduct manned exploration on the Moon by participating in NASA’s Deep Space Gateway project, in which the United States plans to put a space station in lunar orbit in the late 2020s. A GOJ panel discussing Japan’s space policy will put together a report on the issue in the near future. The paper wrote that Japan is hoping that it will be able to obtain scientific data and strengthen its competitiveness in the field of space utilization by joining an international space probe.