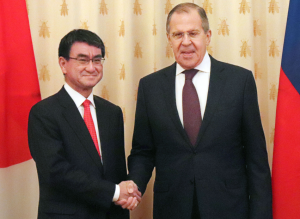 All Saturday morning papers reported on Foreign Minister Kono’s meeting with Russian Foreign Minister Lavrov in Moscow on Friday. Mainichi wrote that Lavrov expressed opposition to Japan’s plan to procure the Aegis Ashore land-based missile defense system by saying that it violates the Intermediate-Range Nuclear Forces (INF) Treaty between the U.S. and Russia. However, Kono stated in reply that the deployment will not pose a threat to Russia because it is intended to defend Japan from North Korean threats. Yomiuri wrote that the Russian foreign minister expressed at a post-meeting joint press conference his nation’s concern about the possibility of Washington taking military action against the DPRK by saying that it is worrisome that Prime Minister Abe said Japan stands 100% with the United States. Kono and Lavrov also discussed the planned joint economic activities on the Northern Territories and agreed to apply further pressure on North Korea to urge Pyongyang to abandon its nuclear and missile programs. However, Lavrov added that dialogue is the best way to resolve the North Korean issues.