Ambassador Hagerty says U.S.-Japan relationship is “stronger than ever” 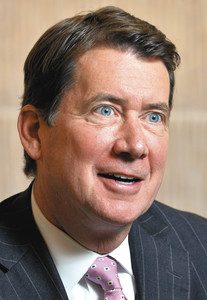 The Sunday edition of the Nagoya-based Chunichi Shimbun front-paged its recent one-on-one interview with Ambassador Hagerty. The paper wrote that the Ambassador highly praised President Trump’s recent visit to Japan by saying that the relationship between the United States and Japan is now stronger than ever. Concerning the United States’ response to North Korea, the Ambassador stated that the leaders of the U.S. and Japan are in agreement on ratcheting up the diplomatic pressure on the DPRK.

Concerning the U.S. trade deficit with Japan, the Ambassador was quoted as saying that there have been serious imbalances in the agricultural sector and that it is necessary to maintain efforts to support innovation in pharmaceuticals and medical devices, expressing hope that Japan will continue to support research and development in the sector through its pricing structure.

Regarding Japan’s planned purchase of defense equipment from the U.S., the Ambassador stated that the President’s primary focus is national security. The Ambassador added that although the trade deficit with Japan may be reduced as a result, strategic collaboration is the primary goal and that the President believes that advanced U.S. technologies will help Japan enhance its defense capabilities.

Concerning Japanese automakers’ investment in the United States, the Ambassador was quoted as saying that Toyota’s and Mazda’s recent announcements on their construction of new plants in the U.S. are very encouraging.