The Nikkei Inc. and TV Tokyo conducted a joint telephone-based public opinion poll on Nov. 24–26. One proposal in the Abe’s government plan to introduce free education programs aims to make authorized nursery schools for children aged three to five free for all households. But the majority of respondents (57%) said high-income earners should shoulder a portion of the costs, while 26% said the program should be free regardless of parents’ income. Some 11% said such schools should not be made free regardless of parents’ income.

At the beginning of December, the government will announce a 2 trillion yen policy package for making education free of charge and it will be centered on making authorized nursery schools for children aged three to five free for all households. Currently, households shoulder costs on a sliding scale based on household income.

Approval for the government of Shinzo Abe polled at 52% in the recent survey, little changed from the 54% found in the previous [spot] poll conducted on Nov. 1–2. Disapproval remained almost flat as well at 39% (previous poll: 38%). Approval had fallen to 39% in July as a scandal surrounding Kake Educational Institution’s plan to create a new veterinary school took a toll, but it turned upward in August and has been around 50% in the three polls since the September poll taken before the Lower House election.

The Ministry of Finance is considering an income tax system reform that would increase taxes on company employees that earn over 8 or 9 million yen a year and decrease taxes on the self-employed and freelancers. Those in favor of this outnumber those opposed, 53% to 28%.

Only 27% of respondents said they support Minister of Education, Culture, Sports, Science and Technology Yoshimasa Hayashi’s decision to approve Kake Educational Institution’s plan to build a new veterinary school, while some 60% said they do not support the decision. Some 71% said they are not convinced by the government’s explanation regarding procedures taken in relation to the approval of Kake Educational Institution’s new veterinary school, easily outdistancing the 19% who said they are convinced.

The survey was conducted on Nov. 24–26 by Nikkei Research Inc. via random-digit dialing (RDD) to both landlines and mobile phones. It drew 1,013 responses from men and women aged 18 and older nationwide, for a response rate of 49.4%. 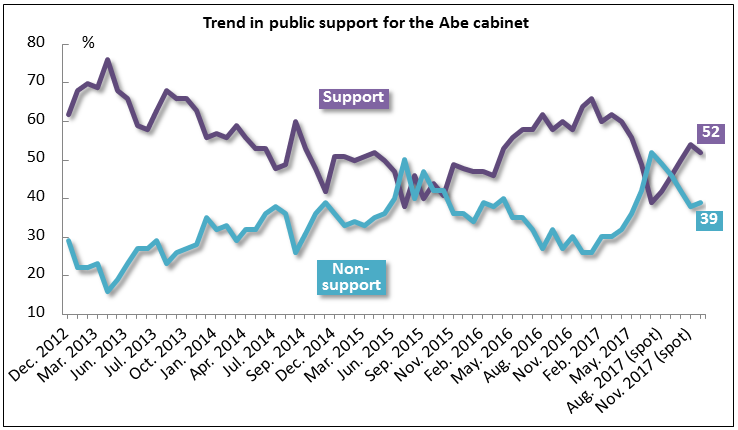