With 14% support rate, CDPJ is head and shoulders above other opposition parties, Nikkei poll

According to the joint poll conducted by the Nikkei Inc. and TV Tokyo [on Nov. 24–26], the Constitutional Democratic Party of Japan (CDPJ) is maintaining its position as the main opposition party in the Lower House, as public support for the party remains unchanged from the 14% found in the previous poll taken at the beginning of November. Support for the Party of Hope, Nippon Ishin (Japan Innovation Party), and other opposition parties remains low at 3% or less. The CDPJ is stepping out ahead, as a gap has emerged in public backing for the CDPJ and the other opposition parties. In the survey, respondents were asked about the relationship between the CDPJ and the Party of Hope, which are composed of many members originally from the Democratic Party (DP), and some 61% of respondents said there is no need for the opposition parties to join hands again. It looks like it will be hard for the opposition parties to reunite.

61% say there is no need for former DP to reunite

The CDPJ was formed at the beginning of October prior to the Lower House election. The new party debuted in the previous poll taken at the beginning of November and yet still garnered a 14% support rate. This is the highest support rate for a main opposition party since the launch of the second Abe administration in 2012. Moreover, support for the CDPJ remained unchanged in the recent poll.

Kiyomi Tsujimoto, CDPJ Diet policy chief, told the Nikkei that his party’s support rate is high because “the CDPJ continues to demonstrate in the Diet where the party stands.” During Diet debate, CDPJ leader Yukio Edano has clearly expressed his party’s opposition to the amendment of Article 9 of the Constitution, and it is thought that the CDPJ is attracting the support of liberals.

By age group, about 10% of those aged 18 to 29 support the CDPJ, but the support rate rises the older the age group, with party support among those age 70 or over reaching 20%.

It was unclear where the Party of Hope stood on issues as it put priority on countering the Abe administration. A high-ranking official in the Party of Hope says, “It will be necessary to not just oppose everything but to present solid proposals going forward.” The party, however, is in the shadow of the CDPJ, which is adopting a more confrontational stance.

The DP is mainly composed of Upper House members and there is a limit to how much of a presence it can exert in the Lower House. DP President Kohei Otsuka is hurrying to reform the party, saying, “We will conduct a radical review.”

It looks like the gap in support that has emerged between the CDPJ and the other opposition parties will impact inter-party coordination and re-reorganization. Some 61% of respondents in the survey said there is no need for the CDPJ, the Party of Hope, and the Group of Independents, which are composed of former DP members, to join forces again. Only 30% said otherwise. Some 56% of CDPJ supporters also said reuniting is not necessary. Driving Edano’s move to keep at arm’s length the idea of joining together with other opposition parties is this sentiment among the people. The DP will look to join hands with the CDPJ and the Party of Hope, but the move will not gain momentum.

Some 30% of pollees described themselves as independents, up 7 percentage points from the previous poll. This means that independents still outnumber CDPJ backers. The LDP’s approval rating fell 5 points to 39% but stayed far above the leading opposition’s. The opposition parties face the difficulty of having to catch up with the LDP while not being able to reunite with each other.

[Polling methodology: The survey was conducted on Nov. 24–26 by Nikkei Research Inc. via random-digit dialing (RDD) to both landlines and mobile phones. It drew 1,013 responses from men and women aged 18 and older nationwide, for a response rate of 49.4%.] 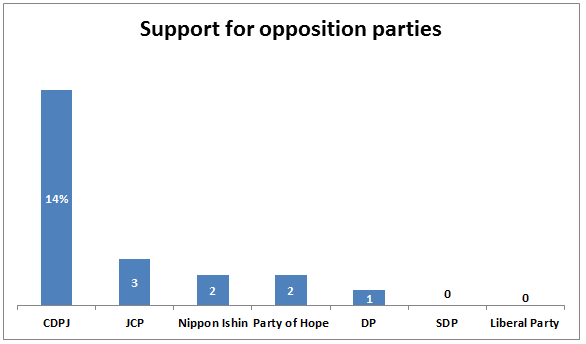