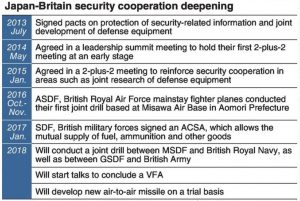 Japan and Britain are considering beginning talks next year to conclude a visiting forces agreement (VFA), which would foster smooth activities of the Self-Defense Forces and the British military when they are visiting either nation, The Yomiuri Shimbun has learned.

At the so-called two-plus-two meeting between Japanese and British foreign and defense ministers in London scheduled for Dec. 14, the two countries are expected to confirm the reinforcement of joint exercises. The Japanese government intends to prepare for the possible deterioration of situations in the Korean Peninsula, the East China Sea and the South China Sea, by expanding the scope of defense cooperation with Britain, which Tokyo has positioned as a “quasi-ally.”

If talks about a VFA are realized, they will be the second following talks with Australia. Japan and Australia began discussions in 2014, and an agreement is expected to be reached soon.

Under the current system, when staying in Japan on a temporary basis, the British military has to undergo procedures such as applying for customs exemptions for items they carry, and obtaining permission to bring arms and ammunition.

Even for the purpose of disaster-relief missions, the same procedures are required to exempt them from liability for compensation in the event of property damage during their lifesaving activities. It is assumed that a VFA would make these procedures unnecessary or simplify the process.

The British Royal Air Force visited Japan last year, realizing a joint exercise with Japanese counterparts for the first time. Next year, the British navy’s latest aircraft carrier will be deployed in the sea near Japan and conduct a joint drill with the Maritime Self-Defense Force. In addition, a joint exercise between the Ground Self-Defense Force and the British Army is being considered to be conducted in the same year.

It is expected to take several years to negotiate a VFA, which means that an agreement is unlikely to be realized in time for the joint exercises next year. However, an executive officer of Japan’s Defense Ministry said, “[The VFA] is aimed at hailing the relationship of trust between Japan and Britain, and will lead to an increased deterrent in the Asia-Pacific region.”

At the two-plus-two meeting, Tokyo and London also will make arrangements for the development trials of a new air-to-air missile. They are aiming to produce a prototype by around fiscal 2023. Based on a medium-range, air-to-air missile named Meteor, which was jointly developed by six countries including Britain, they plan to improve its strike accuracy by equipping it with a high-performance Japan-made sensor.

If their production trial succeeds, they will begin considering joint development for its practical use. If it is realized, it will be the first joint development of such equipment conducted with another nation other than the United States.

Japan-Britain security cooperation has been promoted under the administration of Prime Minister Shinzo Abe. Both governments concluded an agreement of joint equipment development in July 2013, and joint research for missile technology began in fiscal 2014. They signed an Acquisition and Cross-Servicing Agreement (ACSA), which allows the mutual supply of ammunition and other goods between the SDF and the British military in January this year.

In addition, when British Prime Minister Theresa May visited Japan for a few days in August and September, she attended a meeting of the National Security Council and confirmed that they would further improve security cooperation between two countries.