“NHK Special” on Tuesday evening focused on President Trump’s policy on North Korea, looking at the communication between President Trump and PM Abe on North Korea at bilateral meetings and in telephone conferences held more than 20 times. The program also interviewed key GOJ and USG officials, including PM Abe, DM Onodera, former White House chief strategist Steve Bannon, and National Security Advisor McMaster. The program said it learned for the first time that the two leaders had in-depth discussions on North Korea at their first informal meeting in New York in November, adding that in fact the President has had great interest in the North Korean threat since long before he became the President. The program said the two leaders agreed at their summit in February to maximize pressure on North Korea to make the regime give up its nuclear development program. The program said when North Korea fired a mid-range ballistic missile on the day the two leaders were playing golf in Florida, the U.S. side was preparing for the President a statement that indicated a possible military option against the North, adding that the Japanese side, fearing a possible military conflict, asked the President not to read aloud the statement but to only express support for Japan. 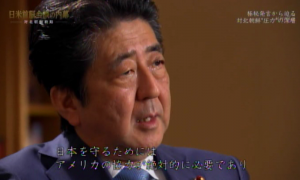 The program also reported that the U.S. deployed the nuclear-powered aircraft carrier USS Carl Vinson to the Korean Peninsula around the end of April following another North Korean provocation, increasing the danger of a military conflict. PM Abe said during an interview: “I trust the United States one hundred percent, and President Trump trusts me one hundred percent. I have no doubt that the U.S. would protect Japan if it were under attack since the President has conveyed to the world the message that the U.S. is with Japan one hundred percent.” The premier once again expressed support for President Trump’s policy to put all options on the table. The program also reported that the President intended to increase pressure on China by deploying the USS Carl Vinson near the Korean Peninsula, adding that both the President and PM Abe have successfully cooperated in tightening the noose around the North by talking to such leaders as President Putin and President Xi. PM Abe also was quoted as saying: “The United States is the only nation that will act together with Japan to protect the lives of the Japanese people as its ally. U.S. cooperation is essential in protecting Japan…I explained to the President our constitutional restrictions, and the President is well aware of those restrictions. Enhancing our bilateral cooperation is conducive to protecting the lives of the people.”