North Korea claims to have test-fired “ICBM that can hit anywhere in the U.S.” 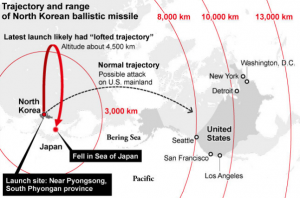 All papers gave top play to reports on North Korea’s announcement on Wednesday via state-run Korean Central Television that it successfully test-fired a Hwasong-15 missile, a new intercontinental ballistic missile that is capable of hitting anywhere in the United States with a nuclear warhead. The papers wrote that despite Pyongyang’s assertion, it will probably take more time for the DPRK to acquire the technology to actually mount a miniaturized nuclear warhead on an ICBM. Yomiuri speculated that the North may have launched the missile in protest against Washington’s re-designating it a state sponsor of terrorism on Nov. 20. Sankei conjectured that the Trump administration will step up its economic and diplomatic pressure on North Korea to the maximum level. Mainichi wrote that calls for hardline measures are increasing in the U.S., quoting Senator Graham as telling CNN on Tuesday: “We’re headed to a war if things don’t change.” Nikkei wrote that according to a source connected to U.S.-Japan relations, Pyongyang may conduct another nuclear test at the end of this year or the beginning of 2018.

Yomiuri interpreted President Trump’s Twitter message “Additional major sanctions will be imposed on North Korea today” as an expression of his intention to continue applying maximum pressure on Pyongyang. The papers wrote that President Trump spoke by phone with Chinese President Xi on Wednesday and urged the Chinese leader to use all available levers to convince North Korea to end its provocations and return to the path of denuclearization. Yomiuri wrote that North Korea’s latest missile launch indicates that Chinese diplomacy failed. The paper pointed out that restricting crude oil exports to North Korea is the only remaining option for Beijing to further press Pyongyang.

The UN Security Council will hold an emergency meeting on Wednesday afternoon to discuss the latest North Korean missile launch in response to a request from the United States, Japan, and South Korea. Asahi wrote that attention is being focused on whether the council will be able to agree on further pressure on the DPRK. Sankei argued that Chinese cooperation with the UNSC holds the key, adding, though, that it would be difficult for Beijing to halt crude oil exports to North Korea.

Yomiuri wrote that the Moon administration’s approach of easing tensions with North Korea through its participation in the Winter Olympic Games in Pyeongchang next year has been set back by the North’s missile launch. Nikkei wrote that Japan plans to continue to apply maximum pressure on the DPRK together with the U.S. and South Korea, but that the GOJ is concerned that Seoul may distance itself from the efforts by Washington and Tokyo in order to prevent tensions on the Korean Peninsula from escalating further.