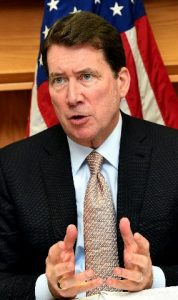 The Kyushu regional Nishinippon Shimbun ran a one-on-one interview with Ambassador Hagerty that was conducted in Fukuoka on Dec. 1. The paper wrote that the Ambassador expressed his willingness to visit the A-bombed cities of Hiroshima and Nagasaki by saying that he is looking forward to visiting both cities. Concerning the safety of the Osprey, the Ambassador stated that the United States will ensure the safety of the aircraft as much as humanly possible. Asked whether President Trump requested Prime Minister Abe to start negotiations for a U.S.-Japan FTA at their summit meeting in Tokyo in November, the Ambassador said that the two nations haven’t formally initiated an FTA process but have talked about areas that will have to be addressed. With regard to North Korea, Ambassador Hagerty was quoted as saying that the final goal of the United States is the complete, irreversible, and verifiable denuclearization of the Korean Peninsula.