According to the Asahi Shimbun poll on the economy conducted in November targeting 100 leading companies, a total of 90% of respondents reported that they think the current domestic economy is either “expanding” or “gradually expanding.” This marks an improvement in companies’ objective assessment of the economy. Asked if they have a tangible sense of the economic expansion, which is considered the second-longest in the postwar period, some 44 companies said no.

The survey is taken twice a year and is conducted in principle through interviews with top corporate executives. The current survey was conducted Nov. 13–24. A total of 98 responses were received.

Mizuho Financial Group Managing Executive Officer Koichi Iida described what has led to the good economic times: “In addition to the strong auto industry, semiconductors and the electrical machinery sector is up. The Olympics and inbound demand are also driving the Japanese economy.”

However, there were also many that said they do not have much tangible sense of the economic expansion. Asked why, 26 companies said that “wages are not increasing enough,” while 18 said that “it is hard to expand demand because the market is mature.”

Tadashi Yanai, chairman and president of Uniqlo operator Fast Retailing, says, “[The current expansion] is just a bubble created by a rise in stock prices. Only companies targeting overseas markets are doing well. The Japanese economy itself has not improved.” 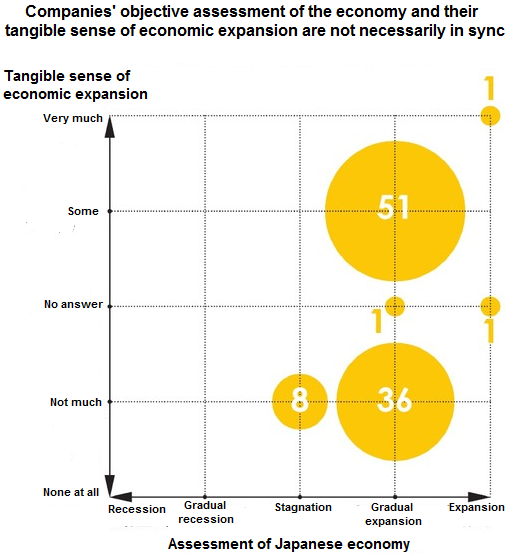