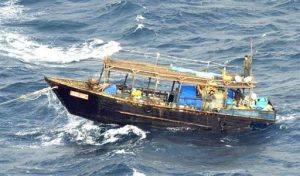 Nikkei highlighted the many North Korean wooden boats that have washed up on Japanese along the Sea of Japan, saying that the GOJ is worried that DPRK agents may be trying to infiltrate the country disguised as fishermen. Politicians are calling for the GOJ to enhance border controls at sea since small boats are hard to detect by radar. However, some experts reportedly insist that it is inconceivable that North Korea would send its operatives into Japan using boats.