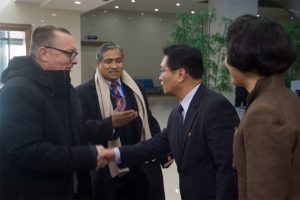 All papers highlighted UN Under Secretary General for Political Affairs Feltman’s four-day visit to North Korea beginning on Tuesday, with Asahi asserting that expectations are mounting worldwide for the trip to achieve a breakthrough in the DPRK standoff. While quoting an unnamed State Department official as saying: “We are paying close attention to the UN’s exchanges with North Korea,” the daily said the USG apparently conducted close coordination on the visit with Feltman, a former U.S. diplomat. However, Nikkei wrote that the Trump administration does not appear to be very enthusiastic about the UN’s diplomacy, quoting a spokesperson for the U.S. mission to the UN as saying: “We will continue to look for a peaceful diplomatic solution, but the truth is that North Korea has shown no interest in dialogue.” Sankei said the USG and the GOJ did not voice opposition to Feltman’s mission because the purpose of his trip is to convey to Pyongyang the global consensus on strictly enforcing sanctions on the Kim regime and seeking the “complete and irreversible” denuclearization as set forth in relevant UN Security Council resolutions.

The papers said the senior UN official’s visit was organized in response to an invitation from North Korea, noting that the Kim regime is desperate to avoid further international isolation in light of the stricter implementation of UN economic sanctions. Pointing out that Feltman plans to hold talks with Foreign Minister Ri Yong Ho, the articles said attention is focused on whether President Kim Jong Un will agree to meet with the UN diplomat. The papers added that depending on the outcome of Feltman’s mediation efforts, UN Secretary General Guterres may decide to make a visit to Pyongyang.