Visa overstayer from China plans lawsuit over being set on fire

A Chinese man who worked illegally in Japan after overstaying his technical intern trainee visa said he will sue his former employer and a colleague who set him on fire at their job site.

The 32-year-old man, who is currently being detained by the Tokyo Regional Immigration Bureau, will demand about 90 million yen ($796,500) in compensation in the lawsuit that he plans to file at the Tokyo District Court.

He said the attack left him with severe scars and physical impairment.

“I cannot work anymore due to the aftereffects (of the injuries),” he said in an interview with The Asahi Shimbun.

Like others who have entered Japan under the government-initiated foreign technical intern training program, he remained in the country to work after his visa expired.

The program is mainly intended to transfer skills and knowledge to developing countries through on-the-job-training here. However, it has also been criticized as a source of “cheap labor.”

According to the petition he will submit to the court and other sources, the Chinese man initially arrived in Japan in 2014 under the program and worked with a farming family in Chiba Prefecture, east of Tokyo.

He said he ran away from the farm because the job was “low paying” and he was “subjected to discrimination.”

He later found a job online and started working for Kurusu Shoji, a civil engineering company based in Ibaraki Prefecture, in 2016.

The man and a Japanese permanent staff member of the company got into a dispute at a work site in the prefecture in May. The employee poured oil over the Chinese man and set him on fire, leading to burns on his upper body and two months of hospitalization, he said.

The incident occurred just after his permit to stay in the country had expired.

Ibaraki prefectural police arrested the Japanese employee, who is no longer with the company.

During questioning, he admitted to dumping the oil on the Chinese man but insisted that while he had a lighter, he did not ignite the oil, and that the “fire started by itself.”

In June, the Shimotsuma branch of the Mito District Public Prosecutors Office indicted the former employee on charges of assault for pouring the oil on the Chinese man, but not for injuring him.

The Shimotsuma branch of the Mito District Court found the former employee guilty, and handed him an 18-month prison sentence, suspended for three years.

In an out-of-court settlement, Kurusu Shoji paid 4 million yen in compensation to the Chinese man.

However, he said he still suffers from the effects of the fire, including keloid scars on his neck and other areas and an inability to fully lift one of his arms.

“The oil poured on him contained some gasoline, and it caused (chemical) burns,” said his lawyer, Yoshihito Kawakami. “The charge should have been inflicting bodily injury at the very least.”

The Chinese man told The Asahi Shimbun that the attack was “not an assault” but “attempted murder.”

In demanding an additional 90 million yen from the company and the former employee, the lawyer plans to argue that the extent of the injuries and amount of lost income were not known at the time of the first monetary settlement.

Kurusu Shoji has not responded to The Asahi Shimbun’s request for an interview as of Dec. 4. 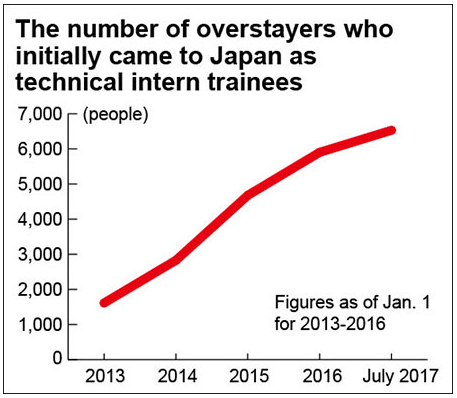 According to the Justice Ministry, 6,532 overstayers who had entered Japan on trainee visas were still in the country as of July 1, a record high since the program started in 1993.

Most of them are believed to have either fled from their training providers or remained in the country to work for other employers after completing the technical training program.

“Police and the Immigration Bureau are working to find them, but we have been unable to grasp the whereabouts of all of them,” said a Justice Ministry official in a department in charge of the issue.