Japanese defense stocks poised for offensive in a dangerous world

TOKYO — The world is an increasingly uncertain place, and that is good for defense stocks. And just like more ordinary, less secretive industries, the performance of defense stocks depends largely on the technical sophistication of their products. By that measure, Japan has some promising names to watch.

In a November report on its Japanese equity strategy, investment house Goldman Sachs said it will continue paying attention to defense stocks in 2018, citing geopolitical tensions over North Korea and expectations for talks on amending Japan’s constitution, which limits the role of its Self-Defense Forces.

Opportunities for Japan to export defense equipment have been rising since the government adopted its “Three Principles on the Transfer of Defense Equipment and Technology” in 2014, allowing for arms exports after proposals have been carefully screened to ensure they promote international peace and Japan’s security.

At the International Paris Air Show in June, Kawasaki Heavy touted its P-1 patrol aircraft. At the Dubai Airshow in November, it showcased its C-2 transporter. Whether the company actually clinches deals to sell large aircraft depends largely on Japanese government policy, so in February 2016 it set up an internal team to explore opportunities.

For some smaller-capitalized defense stocks, the past year has indeed been a bumper one. Nuclear tests and missile launches by North Korea sparked demand for issues like Ishikawa Seisakusho, a maker of defense-related equipment such as aircraft electronics, rising an astonishing 350% since the end of 2016, and firearms and ordinance maker Howa Machinery, which rose 150%.

These smaller companies are not heavily traded, however, and are susceptible to big fluctuations from even slight tailwinds. 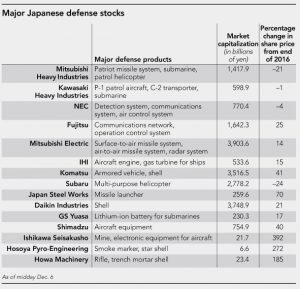 Since the end of the Cold War, a number of conflicts have erupted across the globe. As the threats become more complex, many conventional weapons become obsolete. With the populations of many developed countries shrinking, militaries are required to more with fewer troops. Armed forces the world over — most notably in the U.S. — face changes in the environments where they operate. All of this is testing the ability of global defense manufacturers to adapt.

Tensions have been especially high in the Middle East, where the rift between Iran and Arab nations has been widening, stoking demand for defense equipment.

In mid-October, the small kingdom of Bahrain held its first large international arms fair. A month later, nearby Dubai hosted the region’s largest airshow, drawing aircraft makers from around the world. According to the organizer, participating companies received around $114 billion of orders during the five-day event, with a significant portion going to defense manufacturers. Marillyn Hewson, CEO of U.S. defense company Lockheed Martin, said security concerns will likely remain high in the Middle East for some time.

Defense stocks can also thank U.S. President Donald Trump. Defense budgets were capped under the previous administration of Barack Obama, but Trump has said he will increase defense spending in fiscal 2018, starting in October, by about 10% over last year. The U.S. military is the largest buyer of defense equipment.

Europe has also been expanding its defense capabilities amid political uncertainty in the Ukraine and elsewhere, having cut back after the Cold War. On Nov. 8, NATO decided to establish two new commands to focus on the Russia threat. It has also been under pressure from Trump to increase its military capability.

India too is coming onto investors’ radar. It is strengthening defense capabilities as an increasingly strident China makes moves in the Indian Ocean under its Belt and Road initiative.

India’s government has pledged to expand the manufacturing sector, and has been rushing to produce defense equipment at home. In June, the Tata group agreed with Lockheed Martin to jointly produce U.S.-developed F-16 fighter jets for India’s air force.

Phillip Securities Japan head of research Hiroki Ihara said the defense industry has a specialized niche because of its technological secrecy and the relatively small number of players. General Dynamics of the U.S., for example, is one of only a few companies that can build nuclear submarines, supplying 15 of the 19 types of nuclear submarine to the U.S. Navy.

Defense systems at a turning point

GS Yuasa Technology, a unit of battery maker GS Yuasa, has been winning orders for its lithium-ion battery cells since submarines began using lithium-ion battery cells instead of lead-based batteries in 2015. Given the prospect of stable demand for submarines and repairs, the company started mass producing the battery at a special factory in March. Batteries from the factory will be supplied to the Japan Maritime Self-Defense Force in August.

Meanwhile, U.S.-Japan missile defense systems are at a major turning point after North Korea’s missile launches in April and May demonstrated rapid improvements in its ballistic missile technology.

North Korea showed it can now launch missiles on a “lofted” trajectory — a steep angle reaching a higher point than regular missile launches — and can carry out a “saturation attack” — simultaneously bombarding the same target with multiple missiles. This demonstrated that conventional missile defense systems used by U.S. and Japan may no longer be sufficient.

Given the changing circumstances, the U.S. Department of Defense in June sought technical information from defense manufacturers on the possibilities for a new type of weapon that can knock down ballistic missiles immediately after launch using laser-armed drones.

This would require a launching system and power source that could fire multiple lasers at once, and yet be small enough to fit onto a drone. Companies such as Kawasaki Heavy and Mitsubishi Electric have promising technologies in this area, but still face hurdles in making them commercially viable.