What the polls are saying (Part 1): Cabinet and LDP support strong in Western Japan, low in Eastern Japan

The cabinet and political party support rates found in Nikkei’s regular public opinion polls are nationwide figures. If the data is viewed by region or occupation, are there any differences in the support rates? Analyzing the data of polls conducted to probe people’s views around the time of national elections reveals detailed trends in public opinion. This series takes an in-depth look at the sentiment of voters throughout the Japanese archipelago.

In light of the fact that Oct. 10 was the official start of campaigning for the recent Lower House election, Nikkei conducted a telephone-based public opinion poll of about 130,000 voters on Oct. 10–11. Responses were received from 78,285 people for a response rate of 60%. Based on this data, the cabinet support rate was calculated for each of Japan’s 47 prefectures.

Abe enjoys high level of support in his home prefecture

The Liberal Democratic Party (LDP) has long had a strong support base in Yamaguchi Prefecture, and there is a strong tendency for voters to support the cabinet if a local politician becomes prime minister. In the poll conducted in relation to the 2009 Lower House election, the cabinet support rate in then-Prime Minister Taro Aso’s hometown of Fukuoka was second in the nation at 29%, nine points higher than the nationwide figure of 20%.

In the October 2017 poll, the cabinet support rate in Tottori was interesting. Tottori is the hometown of former LDP Secretary-General Shigeru Ishiba, who lost to Prime Minister Abe in the 2012 LDP presidential election, and cabinet support in the prefecture around the time of the 2017 Lower House election was 31%, making it the third lowest in the nation after Okinawa and Fukushima. Ishiba’s criticism of the Abe cabinet may have pushed down the approval rating in the prefecture.

Looking at the cabinet support and LDP support rates by prefecture, one thing becomes clear:  support for Prime Minister Abe is stronger in Western Japan than in Eastern Japan.

Why is support for Prime Minister Abe stronger in Western Japan than in Eastern Japan? One reason is the strongly regional nature of government and municipal workers’ labor unions, which support the opposition bloc. A top LDP official says: “Government and municipal workers’ labor unions have been active in Eastern Japan for decades, so criticism of the administration tends to be strong there.”

The agricultural nature of Eastern Japan also seems to be influencing the situation. Hokkaido and Tohoku, where dairy farming and rice are primary industries, are feeling the impact of the Abe administration’s agricultural policy, including the Trans-Pacific Partnership (TPP) trade pact. For this reason, there is opposition to the administration. The LDP candidate in Yamagata lost the 2016 Upper House election as JA ballots went to anti-LDP parties. In the October 2017 Lower House election, an LDP candidate in Tohoku says, “I kept my eye on the JA ballots.”

It can be concluded, therefore, that various factors worked together to create the situation where support for Prime Minister Abe is stronger in Western Japan than in Eastern Japan.

No major difference in percentage of election wins

In the October Lower House election, the LDP performed well and enjoyed a landslide victory over the opposition parties even in Eastern Japan, where the cabinet support rate is relatively low. Looking at the election results of LDP official candidates and LDP-backed candidates, there was no major difference between the percentage of elections won in Eastern and Western Japan, although the rate for Western Japan was slightly higher than that for Eastern Japan at 81% and 76%, respectively. In a remarkable number of cases, the LDP candidate won even in constituencies where the cabinet support rate was low provided the party support rate was high.

Meanwhile, there were 39 constituencies where the cabinet support rate was higher than the national figure but the LDP support rate was lower. Most of them, including Osaka and Hyogo, were in Western Japan. LDP candidates took seats in only 69% of the elections in these areas. A ruling parties’ Diet member representing Kansai says, “Nippon Ishin (Japan Innovation Party) has a strong support base here, particularly in Osaka, and in many cases, our candidates lost after a close contest.” The LDP and Nippon Ishin vied for the votes of people who support the cabinet and ended up taking votes from each other. 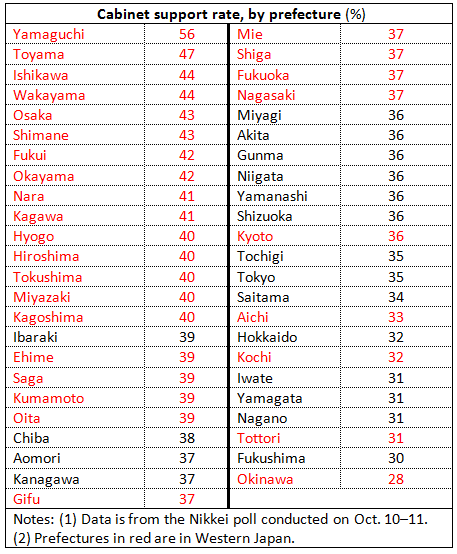 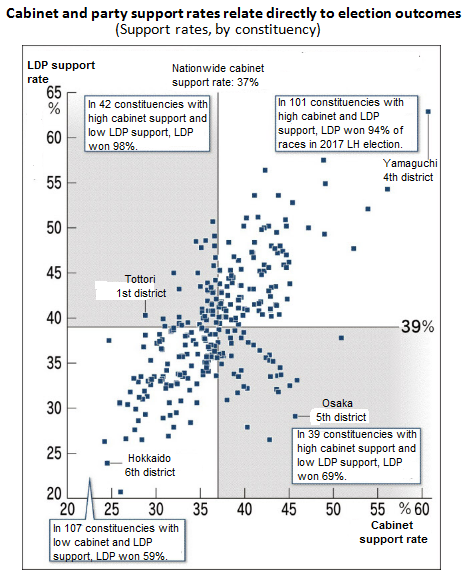