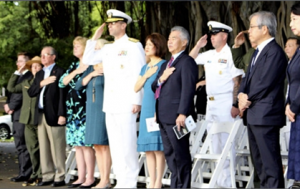 Several Sunday papers reported that a ceremony to commemorate the 76th anniversary of the Pearl Harbor attack was held in Honolulu on Friday. During the event that was co-sponsored by the U.S. Navy and the Japanese Consul General, Deputy Commander of U.S. Pacific Fleet Matthew Carter said: “The U.S. and Japan were enemies 76 years ago. Since then, we’ve forged strong bonds and deepened our friendship.”