U.S. serviceman in coma after his car involved in pileup on Okinawa Expressway 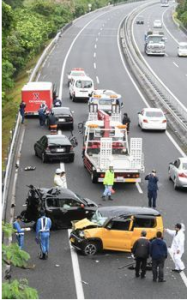 The pileup on the Okinawa Expressway

At 4:50 a.m. on Dec. 1, a pileup involving six cars occurred on the outbound lane of the Okinawa Expressway in Okinawa City. A regular passenger car with a Y license plate driven by a U.S. Marine Master Sergeant (44) struck a car from behind. When the U.S. Marine got out of the car, he was hit by car driven by a U.S. Marine staff sergeant (28). The master sergeant, who sustained a fractured skull and other injuries, was taken while unconscious and in critical condition to a hospital in the central part of the main island of Okinawa.

According to the Okinawa Prefectural Police mobile traffic unit, the Master Sergeant, who was driving the car with a Y license plate, parked on the shoulder of the expressway after striking a compact car that turned on to its side after rear-ending another car. Then a U.S. military truck approaching from the rear collided with the compact car and struck the central divider of the expressway and the vehicle with a Y license plate. The Master Sergeant, who had got out of his car, was run over by another car with a Y license plate [driven by the staff sergeant] approaching from the rear.

A man in his 50s who was in the car that turned on to its side sustained minor non-life-threatening injuries.