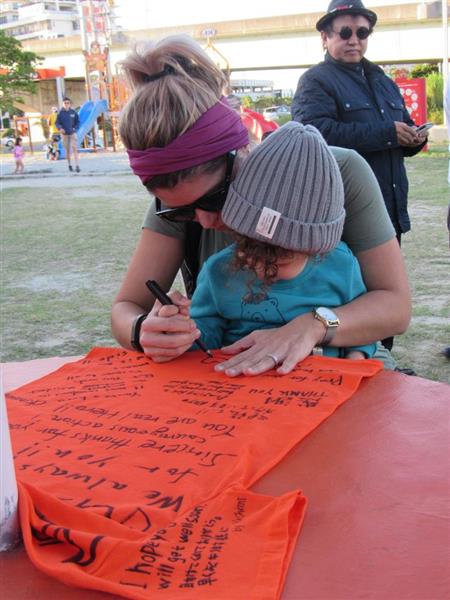 On the evening of Dec. 10, Okinawa residents gathered in Urasoe City to “send prayers” to U.S. Marine Corps Master Sergeant Hector Trujillo (44), who sustained serious injuries while rescuing a Japanese involved in a traffic accident. The Okinawa residents wrote messages of appreciation and best wishes for quick recovery on two T-shirts.

Trujillo, who is stationed in Okinawa, was hit by a passing vehicle while he was rescuing a Japanese from a car that had crashed in an accident involving six vehicles. The accident occurred in Okinawa City, Okinawa Prefecture.

Yuki Tomihara (23), an Urasoe company employee, was moved by the heroic deed of Trujillo, who sacrificed himself to save a Japanese, and she invited people via Facebook and other media to write a message to him.

Feeling compelled to respond to the call, about 50 people, including Americans, wrote their sentiments in English and Japanese with a pen on the T-shirts.

“Thank you so much for helping a Japanese.”

“Sincere thanks for your courageous deed!”

“You are our good friend.”

“Hang in there!! We are praying for you.”

“We look forward to the day when we can once again see your smile and witness your bravery.”

In no time at all, the two T-shirts were filled with heartfelt messages.

Tomihara will send the T-shirts and the senbazuru  which she is making herself, to Trujillo, his wife, Maria, and their three children by Christmas Eve (Dec. 24) at Naval Medical Center San Diego, the California medical facility where he is receiving treatment. [A senbazuru is a collection of 1,000 origami cranes tied together on a string and assembled as a prayer for good health.]