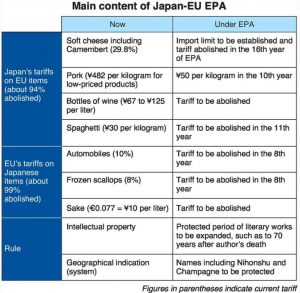 Japan and the European Union concluded more than four years of negotiations over an economic partnership agreement on Friday that will bring to fruition an enormous and significant free-trade bloc. The two sides intend to use the agreement to promote free trade amid a global spread of protectionism.

A World Trade Organization ministerial meeting — the body’s highest decision-making entity — is set to begin Sunday in Argentina. In advanced talks over a joint ministerial statement, the United States, which has signaled it is putting its own interests first, took issue with language describing the importance of multilateral trade.

Japan and the EU’s announcement on the conclusion of an EPA demonstrated the importance they place on free trade.

The EPA talks faced difficulties regarding procedures to settle investment disputes between companies and governments, even after a broad agreement was reached in July.

Japan insisted on the use of existing international organizations, but the EU called for the creation of an investment court with stricter procedures, given its concern that it might be forced to revise its own systems due to a series of lawsuits from large companies.

A break came in autumn when the EU side unofficially approached Japan with the idea of splitting off talks on the investment issues, including the dispute-resolution mechanism.

The EU’s 28 members have a unified customs system, and the right to conclude agreements that would eliminate or reduce tariffs is held by the EU, not its individual member states.

However, if the accord covered the investment issues, approval from the national assemblies of all 28 member states would be required, which could delay the pact’s implementation.

Japan agreed to split off the investment issues in a bid to ensure that the tariff provisions — which will bring major benefits to automobile makers and consumers — come into force at an early stage.

Japan’s automobile industry welcomed the conclusion of the EPA because lowered tariffs on automobile exports — which would be implemented in stages — would reduce the retail prices of their products in the EU.

Japan exported 610,000 automobiles, or 13 percent of its total automobile exports, to the EU in 2016. The EU is an important market, second only to North America, which accounted for 41 percent of exports.

That said, Japanese automakers are increasingly manufacturing vehicles in Europe. “It’s unclear how big the direct benefits will be,” an industry source said.

In the meantime, imports of cheese and wine, two products with deep roots in Europe, are expected to increase. Consumers would benefit, but domestic producers could be threatened. “If we’re flooded with cheap foreign cheese, it could lead to a culling of domestic dairy products,” a 59-year-old dairy farmer raising about 130 cows in Sarabetsu, Hokkaido, said anxiously.

Producers of products such as Japanese sake, tea and wagyu-branded beef see the EPA as a chance to increase exports to Europe. The government plans to increase support for livestock farmers and strengthen export assistance programs.