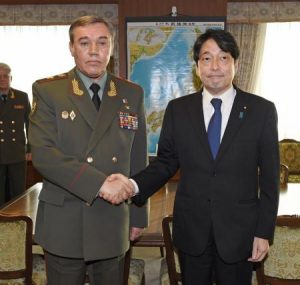 Yomiuri, Asahi, and Nikkei took up a meeting held yesterday in Tokyo between Defense Minister Onodera and Chief of the General Staff of the Russian Armed Forces Gen. Gerasimov, during which they agreed that Pyongyang must not be allowed to possess nuclear and missile capabilities. The Russian general underscored that the DPRK nuclear and missile crisis can be resolved only through peaceful means. He expressed apprehension about enhanced U.S.-Japan and U.S.-Japan-South Korea training with North Korea in mind by saying that the training further destabilizes the situation on the Korean Peninsula.

According to Yomiuri, the Russian military leader expressed understanding for Onodera’s explanation that Tokyo’s planned procurement of Aegis Ashore batteries is intended to defend Japan from DPRK missiles and hence will not pose a threat to Russia or other countries in the region. However, other papers said Gerasimov voiced qualms by saying that the state-of-the-art missile defense platform is managed by the U.S. military, to which Onodera responded by saying that the Japanese Aegis Ashore batteries will be managed by the SDF.

Asahi wrote that as Moscow is set to beef up its defenses in the Northern Territories and their vicinity, Japan’s goal of achieving a breakthrough in the territorial dispute appears elusive. The paper added that National Security Secretariat Secretary General Yachi plans to visit Moscow tomorrow to hold talks with senior Putin administration officials to ease Russian concerns about the Aegis Ashore deployment.