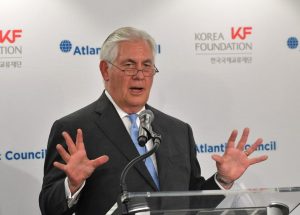 All TV networks took up remarks made on Tuesday in Washington by Secretary of State Tillerson, who stressed that the United States is committed to realizing the denuclearization of the Korean Peninsula by saying that it will not accept North Korea’s possession of nuclear weapons. At the same time, the Secretary stressed the importance of commencing dialogue with North Korea by saying: “They have to come to the table with a view that they do want to make a different choice…. We’re ready to talk anytime North Korea would like to talk, and we’re ready to have the first meeting without preconditions. Let’s just meet. We can talk about the weather if you want.” While admitting that it is difficult to hold dialogue in the face of North Korea’s relentless provocations, the top U.S. diplomat also said: “It’s not realistic to say we’re only going to talk if you come to the table ready to give up your [nuclear] program.”

As the remarks apparently reflected the Secretary’s strong desire to resolve the nuclear and missile standoff through dialogue, NHK said they may signal a change in the Trump administration’s policy of not starting dialogue unless Pyongyang shows its readiness for denuclearization first. Other broadcasters said it is unclear whether the Secretary’s willingness to enter dialogue without preconditions is shared by other U.S. administration officials, including President Trump. Fuji TV noted that although the Secretary’s remarks apparently represented a major concession by Washington, White House Press Secretary Sanders said later that President Trump’s views have not changed.

In an update, NHK took up press remarks by Chief Cabinet Secretary Suga, who commented on the Secretary’s statements by saying:  “I would like to avoid commenting on every remark made by the Secretary in the speech. The U.S. and Japanese leaders have held in-depth discussions on North Korea policy at multiple summits and they have agreed 100 percent on maximizing pressure on the DPRK…. We are aware that the White House has just announced that there is no change to the President’s views on North Korea. There is also no change in Japan’s policy of applying maximum pressure through all possible means in coordination with the United States so as to force North Korea to alter its course.”